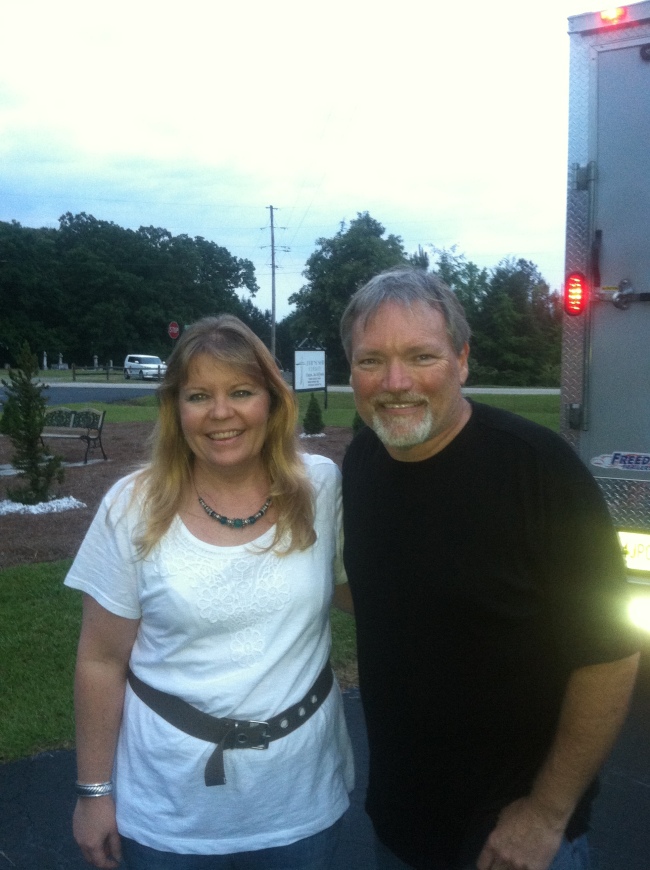 Yep, that’s me with Country Music start John Berry. Now you know why I’m smiling. He honored our small country Church, Friendship Church,  with a concert last night. If you weren’t there you missed a huge blessing.

I’ve been a fan of his for a long time and seeing him live in such an intimate setting was EPIC. Am I still smiling this morning, well yes. My cheeks hurt from smiling. He’s such a down to earth person and so nice. His wife was just wonderful. He had his son on drums and he’s just adorable. The bass player and sound guy were awesome too.

Sometimes when you meet someone famous they’re just so snobbish and above you that you feel like an ant in their presence, but not the case with him and his gang. They felt like down home family and you felt like you’d known them all your life. He got right in the throng of it and hugged, shook hands, gave autographs, and just smiled. They were so  overwhelmingly nice. We even spoke to him about a repeat performance next year.

The music was so beautiful and soul filled that it brought several including me to tears. His music is not your everyday country, but an upbeat calming sound that brings your spiritual soul to a new level of worship. The whole place was in awe.

If you haven’t experienced John Berry what are you waiting for? He’s just as awesome today as he was when I became a fan so many years ago. If it’s possible I became even more of a fan last night. Check him out, you won’t be sorry. His music is so heartwarming and spiritually filled that you will get such a blessing.

May God Bless him, his family, crew, and career.