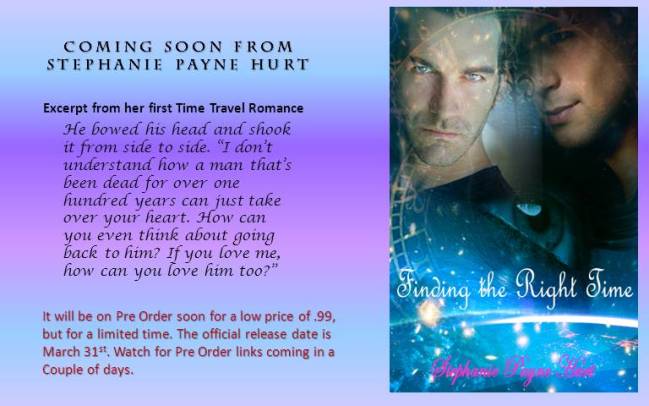 The Pre Order is now officially up on Smashwords.com. It should be available on Barnes & Noble, Kobo and Apple iTunes in a couple of days. Here’s the link: https://www.smashwords.com/books/view/413534. Remember, it’s only .99 for preorder, but after the release on March 31st it will go up to $3.99.

Here’s a excerpt for you to sink your teeth into:

As they neared the tree line she could make out a well-traveled pathway. It opened up as they entered it. The trees were gently swaying with the light breeze. She watched sunlight making its way between the branches. She noticed several large oak trees with moss hanging almost to the ground. She could smell the musty scent of the moss and old trees.

It was weird how comfortable she felt with Anthony. Any other time she would have been a little leery of walking in the woods alone with a stranger, but he didn’t feel like a stranger.

Then she started to see a clearing ahead. He turned to her and smiled. “It’s just ahead in the clearing. I think you will be surprised.” The excitement showed on his face.

As they neared the clearing she noticed a tall wrought iron entranceway. It was amazingly ornate and beautiful. The cemetery was large. It was graced with a huge old live oak in the center of the graves.

“My great-great grandfather planted that oak the day he buried his wife. It’s funny the similarities between you and her. Her name was Lilliana and he called her Lily. I didn’t mention it the other day because I didn’t think you’d be interested, but I can see you would.” He couldn’t help but stare at her. The resemblance was amazing.

She was in awe of the beauty of the place. It was so peaceful. The only sound was the wind whispering through the trees and the slight tinkling sound of a wind chime, but where was it coming from.

“I hear a wind chime. Where is it coming from?” She looked around the trees expecting to see it hanging somewhere among the sprawling limbs.

“It’s on a stand beside the head stone of my great-great grandmother. It’s been there for as long as I can remember. Uncle Thomas has rethreaded it several times. Of course with age it has dry-rotted several times, but it was the dying wish of her husband to keep the wind chimes blowing.” He watched her expression as she looked stunned.

“What’s on your mind? I can tell you are deep in thought.” He wondered what he’d said to affect her so.

“Your uncle said you believe in previous lives. Can I tell you something?” She was still looking at the old oak tree.

“I have some crazy thoughts I know, but I just always feel different from everyone around me. I guess that’s why I’m considered a recluse.” He laughed to himself. “What did you want to tell me?”

“I’ve always felt like I was an old soul. It’s weird but I feel like I’ve seen the house and yard before. You even look familiar to me, but I know I’ve never met you before the other day. Does that sound weird?” She finally chanced a glance at him. The sun was shining down on his dark hair and it glistened. She was struck again by the similarities in him and the man in her dreams.

Well, that’s just a little snippet. I’ll be posting little hints all of March. Also, keep watching for some giveaways. I’m also offering 5 ARC copies to the first 5 people that direct message me. This book has been a long work in progress and I’m really excited about it. The cover is the brain child of my cover designer and myself. I’ve had in my mind what I wanted since I typed the first word. It turned out to be an awesome cover that expressed the way I feel about this book and the characters.