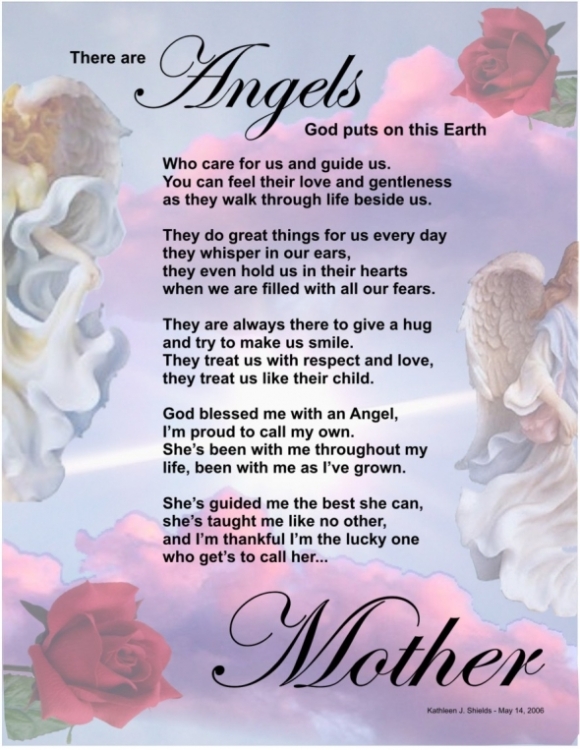 This is to all the Mother’s out there. Hope you have a wonderful day today as you deserve it. My son was quick to hug me this morning and tell me thank you. Of course it brought on the tears. Then at Church our wonderful Pastor talked about Mother’s and their role in our lives. It was quite eye opening and honest. My hubby put his arm around me and squeezed my shoulder. Yep, I shed a tear or two. Bet you knew that already 🙂

It’s been a great day so far. My family met at a restaurant with a buffet and we ate until we were miserable then we went back to my mom’s to eat dessert. How you may ask? Well it’s Mother’s Day and I’m going to enjoy it.

My son asked what I was going to do on this beautiful Mother’s Day and I told him maybe a nap and then work on one of my manuscripts. Also I’m going to admire the beautiful pot of flowers my hubby and son gave me. I picked them out, but it’s the thought that counts.

If you’re mother is still living then make sure if you don’t see her today at least call her because you wouldn’t be here without her. She wiped your nose, changed your diapers, put bandaids on your cuts and nursed you when you were sick. She deserves some respect and show of love. SO if you haven’t called her or been to visit shame on you. It only takes a moment out of your busy schedule to make a call and just say ‘Mom I love you and thank you for everything.” It’s real simple. So just do it.

As always good writing and May God Bless you…

As you can tell from the title it’s been a tough week. I’ve been battling a cold or sinus or crud, whatever you want to call it. Since it’s tax season I’ve been working a lot of hours through the fog.

Of course as it usually goes, life goes on even when you’re sick. My son started football training for tryouts in May. My husband and I have always supported him in whatever he wanted to do. He played baseball for about five years and always wanted to play football. He’s on the 4-H Shotgun team and does really good with that. He loves anything outdoors. Football scares me due to the injuries that can occur, but I know I have to let him do things.

Well as you know I’m a Children’s Minister. Last night I’d prepared for the kids to watch a Bible DVD cartoon since I wasn’t feeling well. Since the teacher of the preschoolers didn’t show up I had all the children. Well as I tried to turn the projector on I soon realized something was wrong. I spent a few frustrating minutes trying to get the projector to connect to the laptop, but to no avail. I then moved the children to one of the rooms that has a large screen television and dvd player.

As I watched the children sit and watch the film I realized how lucky I am. I’m given such a wonderful chance to make a difference in the lives of these children. I smiled to myself and thanked God for the opportunity I’ve been given.

That’s the attitude I decided to adopt with my son on the football thing. He was so excited and I don’t want to dampen his fun by being overprotective. I’ll just be watchful 🙂

So when life gives you lemons, smile and enjoy every sour bite.