Hope your Tuesday morning is wonderful! Mine has been blessed so far. For one, I got up this morning, for another I received my March Issue of Southern Writer’s Magazine. What’s important about that? Well, let me fill you in…

This month I’m featured on Page 5 in the Magnolia Corner section. Check it out: 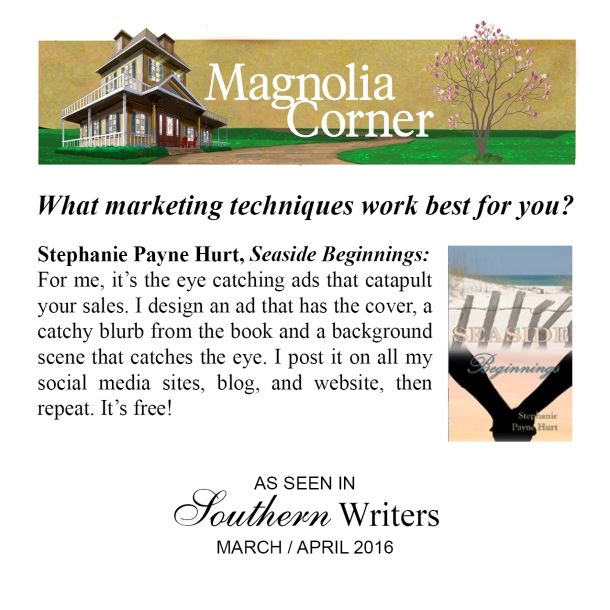 Pretty cool to be included in such a wonderful magazine that supports writers at every turn. When Gary sent me an email about wanting to include me in the Gallery of Stars I was so humbled, but then he asked me to write something for the Magnolia Corner. If you haven’t subscribed to Southern Writer’s Magazine, then I suggest doing so. As a writer, the subscription is 100% tax deductible, but it goes way past that. This magazine will open new doors for you.

So, go over to http://www.southernwritersmagazine.com/ and check out all the things they offer, like Mic Nite and the Suite T blog. I’m telling you now, it’s a must for writer’s.

Go by and check out my page in the Gallery of Stars at http://authors.southernwritersmagazine.com/stephanie-payne-hurt.html 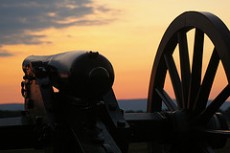 As I told in my last post I’m working on my historical romance “Magnolia Hills”. It’s based in a small Georgia town during the time before, during and after the Civil War. I’m a history lover, but when I started getting into the parts where the war was ready to start I had to do some thinking.

I realized that I had to do a Civil War timeline. There’s no sense writing a historical romance that doesn’t follow history correctly. Of course some of the elements will be changed for dramatic effect, but the real history I wanted to get correct.

The problem was it’s been a long, long time since I studied the Civil War. Yes I’ve watched movies and read books relating to it in the last couple of years, but nothing historically correct. So it was time to do some googling. Google is such an awesome tool for a writer. I just typed “Civil War Timeline” and boom there it was.

I’m glad I did it because I had two of the battles swapped around. That would have been bad. It could’ve totally rewritten history. Nah! Just kidding. I’m sure most readers wouldn’t have even noticed the wrong battles, but I would have and I’m pretty sure my reviewers would have raked me over the literary coals 😉

Well, hopefully I’ll have something to post in the next couple of days. I’m excited about getting this one done. I’m also working on the last bits of “Faith Through The Tears”, but Magnolia Hills seemed to scream a little louder.

. I look forward to tweeting with you…