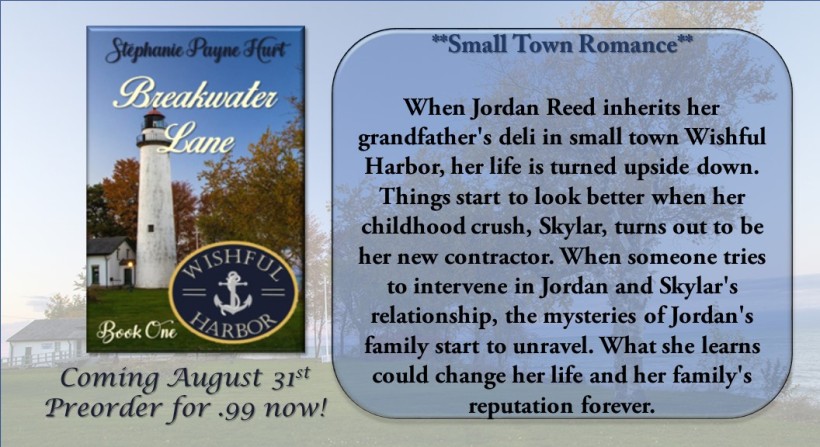 Good morning everyone! Today I want to talk about the main character in Breakwater Lane, the first book in the Wishful Harbor series.

Let’s me introduce you to the spunky, strong willed woman that brings Breakwater Lane to life. Her name is Jordan Reed. She was born in Georgia, but when her parents divorced, she moved with her mom to Denver. But as a child, she spent a couple of weeks every summer with her grandfather in Wishful harbor.

She’d enjoyed those summers. They’d cook together, go to the beach and climb the steps to the top of the lighthouse, then laugh as they reached the top. She’d gained her love of cooking while standing by her grandfather in his deli. Then, when her parents divorced, her mom moved her across the country. She no longer was able to spend her summers with her beloved grandfather.

But she carried on the love of cooking by going to culinary school and becoming a chef. Although her dream was to own a restaurant, she thought it was just a whim. Then when her grandfather died, she was called into a lawyers office for the will. Her grandfather had left her the deli. She was overwhelmed.

Upon arrival in Wishful Harbor, she wondered if she could live in a small town again. Would she be able to get by without the hustle and bustle of Denver? Then she set eyes on Skyler Evans and things began to fall into place, but there was something brewing in the small town of Wishful Harbor that would put everything she’d ever known to the test.

Ok, so, I can’t go much farther without giving away too much of the story, but as you can see, Jordan is a spunky woman with big ideas. You’ll have a love hate relationship with her. Tomorrow I’ll do a character sketch on Skyler Evans.